A balanced world is a better world. How can you help forge a more gender-balanced world?
Celebrate women's achievement. Raise awareness against bias. Take action for equality.
Get everything you need to run a successful International Women's Day right here.

International Women's Day (IWD) is celebrated on March 8 every year.It is a focal point in the movement for women's rights.

After the Socialist Party of America organized a Women's Day on February 28, 1909, in New York, the 1910 International Socialist Woman's Conference suggested a Women's Day be held annually. After women gained suffrage in Soviet Russia in 1917, March 8 became a national holiday there. The day was then predominantly celebrated by the socialist movement and communist countries until it was adopted by the feminist movement in about 1967. The United Nations began celebrating the day in 1975.

The earliest Women's Day observance, called "National Woman's Day,"was held on February 28, 1909, in New York, organized by the Socialist Party of America at the suggestion of activist Theresa Malkiel. Though there have been claims that the day was commemorating a protest by women garment workers in New York on March 8, 1857, researchers have described this as a myth.

In August 1910, an International Socialist Women's Conference was organized to precede the general meeting of the Socialist Second International in Copenhagen, Denmark.Inspired in part by the American socialists, German Socialist Luise Zietz proposed the establishment of an annual Women's Day and was seconded by fellow socialist and later communist leader Clara Zetkin, supported by socialist activist Käte Duncker, although no date was specified at that conference. Delegates (100 women from 17 countries) agreed with the idea as a strategy to promote equal rights including suffrage for women.

The following year on March 19, 1911, IWD was marked for the first time, by over a million people in Austria, Denmark, Germany and Switzerland. In the Austro-Hungarian Empire alone, there were 300 demonstrations. In Vienna, women paraded on the Ringstrasse and carried banners honouring the martyrs of the Paris Commune.Women demanded that they be given the right to vote and to hold public office. They also protested against employment sex discrimination.

The Americans continued to celebrate National Women's Day on the last Sunday in February. 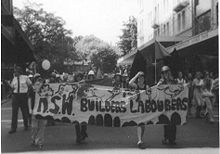 In 1913 Russian women observed their first International Women's Day on the last Saturday in February (by the Julian calendar then used in Russia).

Congrats to all the women's on Friday 8th March 2019